Bike Share has finally made it to Bournemouth, Christchurch & Poole (BCP)

Beryl Bikes are just about to launch their much anticipated bike share scheme for the BCP conurbation. Having agreed a 5 year contract with BCP to supply and run the bike share scheme across the area at no cost to the council. Initially, rolling out the program with just 50 bikes the company plan to have 1000 on the streets by the end of the summer. Martin Jolly, Local Operations Manager for Beryl said “We are very proud to be working in partnership with the BCP on getting more people out of their cars and onto bikes with the Beryl Bike Share program.”

Supporting these type of initiatives and with our continued support for local community programs, Digital Storm were extremely interested in hearing more about Beryl Bikes. Attending the launch event, held at Bournemouth library on the 24th April, Damion Hazael, Director had the opportunity to speak directly with Martin and was interested to understand how the program will work and how Beryl and the BCP plan on making this scheme a success for the area.

The BCP are working hard to improve transport and cycling infrastructure for around 350k residents and this scheme is a good step towards their goal. Already ranked second to London in terms of cycling potential compared to other metropolitan regions in the UK, Bournemouth, Christchurch and Poole is the ideal place for this sort of program.

The scheme will be entirely dockless, instead leaving the bikes in 1 of 100 designated parking bays in major residential areas and busy transport routes of Bournemouth, Christchurch and Poole. The green bikes will be available for instant hire via the Beryl App. Users will be able to easily find and unlock any Beryl bike using the App. For anyone thinking the bikes will be an easy target, they will be sorely disappointed as they all come with GPS tracking and state-of-the-art, app release locks. The App controlling the share scheme is entirely built and developed in-house and comes with tracking software that will allow councils to discover where bikes are being ridden to allow for better future cycling infrastructure. The bike itself was designed and built by Beryl using the experience they gained working in partnership co-designing the latest London Santander bikes.

We at Digital Storm are all in favour of anything that gets more people out of their cars and into the open air. We very much look forward to seeing these jolly green bikes out and about and hope that when more people are using bikes to get around, the council will have to make the much needed improvements to conditions on the roads for cyclists. 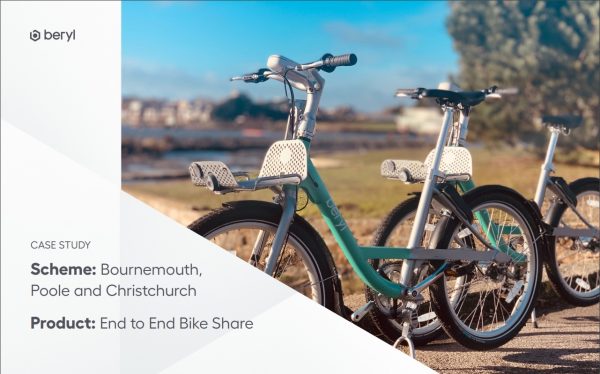